Early Friday afternoon rain forced the first 2016 NASCAR Sprint Cup Series (NSCS) practice session at Richmond International Raceway (RIR) to be cut short (by around 20-minutes), and it was Kevin Harvick – with a lap speed of 129.069 MPH – who was the quickest in the shortened Toyota Owners 400 practice.

Weather permitting, the teams will return to the track at 4:15 p.m. (ET) on FOX Sports 1 for qualifying to determine the starting lineup for Sunday’s race, and it was Jeff Gordon – on Sept. 7, 2013 – that currently holds the series’ RIR qualifying track record speed of 130.599 MPH. If qualifying is rained out, then the starting lineup will be based upon this practice session’s speeds.

The 62nd annual Toyota Owners 400 is scheduled to get underway around 1:20 p.m. (ET) Sunday afternoon on FOX.

Harvick, who led the most laps – 139 out of 313, received his first series victory and fourth top-10 finish of the season, his 32nd series career victory in 542 races and his eighth series victory in 27 races at Phoenix International Raceway.

Carl Edwards finished 0.010 seconds behind Harvick to finish in the runner-up position (a new track record. Previously held by Ryan Newman with a 0.13 second win over Jeff Gordon in 2010), and they were followed by Denny Hamlin finishing third, pole-sitter Kyle Busch fourth and Dale Earnhardt Jr. finished in fifth.

Both Kevin Harvick and Kyle Busch leave Phoenix with the identical amount in the point standings (154), but with his victory today, Harvick is recorded as the points leader.

Up Next: The Auto Club 400 at Auto Club Speedway on Sunday, March 20th, with an approximate starting time of 3:50 p.m. (ET), and television coverage provided by FOX.

Notes: At-track tech is done. No issues. Harvick and Edwards cars back to R&D. 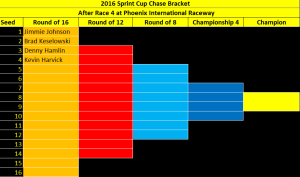 The 12th annual Good Sam 500(k) is scheduled to get underway around 3:50 p.m. (ET) Sunday afternoon, and FOX will provide television coverage of the event.

Kevin Harvick did what he needed to do to advance from round 1 in the “chase for the NASCAR Sprint Cup championship,” and that was to win Sunday’s NASCAR Sprint Cup Series (NSCS) AAA 400 at Dover International Speedway.

Eliminated from advancing to the next round in the “Chase for the Sprint Cup Championship,” and will now just focus on trying to win in the last seven races of the season were: Jamie McMurray, Jimmie Johnson (finished 41st due to rearend axle seal mechanical failure), Clint Bowyer and Paul Menard

Note: Dale Earnhardt Jr., and Jamie McMurray finished round 1 with the identical points (2098) and were tied for 12th-place, and based upon the NASCAR rulebook, the tie-breaker went to Dale Jr., who had the best finish between the two in the round 1 races (which came in today’s race, finishing third and fourth respectively).

Up Next: The Bank of America 500 at Charlotte Motor Speedway on Saturday, Oct. 10th, with an approximate starting time of 7:20 p.m. (ET) on NBC.

The 19th annual SYLVANIA 300 is scheduled to get underway around 2:20 p.m. (ET) Sunday afternoon on NBCSN.

The NASCAR Sprint Cup Series (NSCS) teams were up early Saturday morning for their second SYLVANIA 300 practice session, and it was the event pole-sitter Carl Edwards  – with a lap speed of 133.516 MPH – showing the quickest way around New Hampshire Motor Speedway (NHMS).

The 19th annual SYLVANIA 300 is scheduled to get underway around 2:20 p.m. (ET) Sunday afternoon on NBCSN. 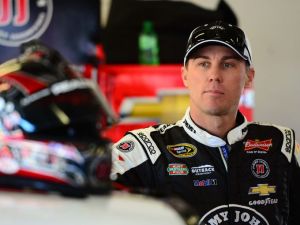 Qualifying on Friday for Sunday’s NASCAR Sprint Cup Series (NSCS) myAFibRisk.com 400 at Chicagoland Speedway was canceled due to rain, and the starting lineup will be based upon the NASCAR rule book – practice session speeds/owners points and attempts made.

Leading the field to the drop of the green flag on Sunday will be the defending series champion, Kevin Harvick, and he will be followed by Joey Logano starting second, Brad Keselowski third, Martin Truex Jr. fourth and Austin Dillon starts fifth.

The 15th annual myAFibRisk.com 400 is scheduled to get underway around 3:20 p.m (ET) Sunday afternoon on NBCSN.

The reigning NASCAR Sprint Cup Series (NSCS) champion, Kevin Harvick, with a lap speed of 188.317 mph, was the fastest Friday during the first myAFibRisk.com 400 practice session at Chicagoland Speedway.

Weather permitting, qualifying to determine the starting lineup for Sunday’s race will be held this evening at 6:45 p.m. ET on NBCSN, and Joey Logano currently holds the series qualifying track record speed of 189.414 mph at Chicagoland, which he set on September 15, 2013.

The 15th annual myAFibRisk.com 400 is scheduled to get underway around 3:20 p.m (ET) Sunday afternoon on NBCSN. 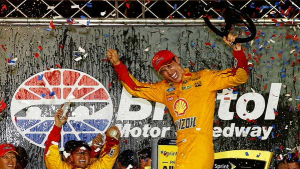 Logano, who also won the event last year, received his third series victory and 18th top-10 finish of the 2015 season, his 11th series career victory in 243 races and his second series victory in 14 races at the track in “thunder valley.”

Up Next: The series takes their final “off-weekend” of season this coming weekend, and they return to action on Sunday, September 6th, at Darlington Raceway for the Bojangles’ Southern 500. The race is scheduled to get started around 7:20 p.m. (ET) on NBC. 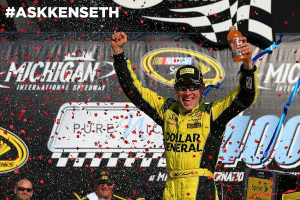 From the pole to victory lane, Matt Kenseth dominated Sunday’s NASCAR Sprint Cup Series (NSCS) Pure Michigan 400, as Kenseth leads the most laps and finishes 1.722 seconds ahead of Kevin Harvick for the victory at Michigan International Speedway (MIS).

Up Next: Saturday night short-track action with the IRWIN Tools Night Race at Bristol Motor Speedway on August 22nd, and with an approximate starting time of 7:50 p.m. (ET)