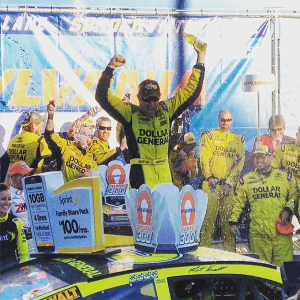 Matt Kenseth joined Denny Hamlin on the “win and you advance” list Sunday afternoon, as Kenseth won the NASCAR Sprint Cup Series (NSCS) SYLVANIA 300 at New Hampshire Motor Speedway, and will advance to round 2 in the “chase for the championship.”

Up Next: The AAA 400 at Dover International Speedway on Sunday, Oct. 4th, with an approximate starting time of 2:50 p.m. (ET) on NBCSN. 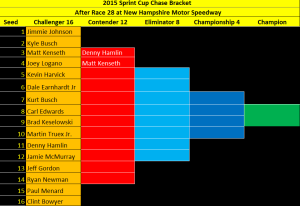 Qualifying to determine the starting lineup for Sunday’s race will be held later this afternoon at 4:45 p.m. ET 0n NBCSN, and it is Brad Keselowski who holds the current series qualifying track record of 140.598 MPH at NHMS – which he set here last year (09/19).

The 19th annual SYLVANIA 300 is scheduled to get underway around 2:20 p.m. (ET) Sunday afternoon, on NBCSN.

There was no catching Matt Kenseth Saturday night in the NASCAR Sprint Cup Series (NSCS), as Kenseth dominated the field and wins the final race of the regular season in the Federated Auto Parts 400 at Richmond International Raceway (RIR).

With the end of the final race of the regular season, the points for the 16 drivers locked into the 10 races that make up “the Chase for the NASCAR Sprint Cup,” will be reset based upon how many races they won, season stats and by points.

Up Next: The first race in the “chase for the NASCAR Sprint Cup,” with the MyAFibStory.com 400 at Chicagoland Speedway on Sunday, September 20th. The race is scheduled to get underway around 3:20 p.m. (ET) on NBCSN 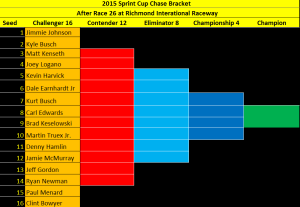 From the pole to victory lane, Matt Kenseth dominated Sunday’s NASCAR Sprint Cup Series (NSCS) Pure Michigan 400, as Kenseth leads the most laps and finishes 1.722 seconds ahead of Kevin Harvick for the victory at Michigan International Speedway (MIS).

Up Next: Saturday night short-track action with the IRWIN Tools Night Race at Bristol Motor Speedway on August 22nd, and with an approximate starting time of 7:50 p.m. (ET)

After the fourth red flag due to rain, the 2015 NASCAR Sprint Cup Series (NSCS) Quicken Loans 400 at Michigan International Speedway, was called an official race with 138 laps out of 200 completed, and Kurt Busch in victory lane.

This was Busch’s second series win and seventh top-10 finish of the season, his 27th series career win in 519 races, and his third series win at the track in the “Irish Hills” of Michigan.

The current series points leader, Kevin Harvick, lead the most laps (63 out of 138) but suffered a flat tire before the final red flag, and finished in 29th. Harvick now leaves Michigan with a 15-point lead over Martin Truex Jr.

Next Up: The series takes Father’s Day Weekend off and returns to action in two-weeks for the first road course of the season with the Toyota/Save Mart 350 on Sunday, June 28th, at Sonoma Raceway. The race is scheduled to get underway at 3:20 p.m. (ET) and will be on FOX Sports 1

It was a battle between NASCAR Sprint Cup Series (NSCS) points leaders Sunday afternoon at Pocono Raceway, as No. 2 in the points, Martin Truex Jr., kept No. 1 – Kevin Harvick – at bay to win the Axalta “We Paint Winners” 400.

With his second-place finish, Harvick leaves Pocono with a 39-point lead over Martin Truex Jr.

Next Up: The series head to the “Irish Hills” of Michigan for the Quicken Loans 400 at Michigan International Speedway on Sunday, June 14th, with an approximate starting time of 1:20 p.m. (ET), and television coverage will be provided by FOX Sports 1.

Once again on Saturday at Dover International Speedway in the NASCAR Sprint Cup Series (NSCS), it was Sunday’s pole-sitter, Denny Hamlin – with a lap speed of 156.087 MPH – showing the quickest way around the track during the final FedEx 400 benefiting Autism Speaks practice session.

The 46th annual FedEx 400 benefiting Autism Speaks is scheduled to get started around 1:20 p.m. (ET) Sunday afternoon, and FOX Sports 1 will provide television coverage of the race. 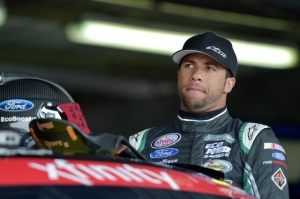 With only 40 drivers attempting to fill the 40-car field starting lineup, there was no one failing to make the field.

The 36th annual Buckle Up 200 is scheduled to get underway around 2:50 p.m. (ET) this afternoon, and television coverage of the event will be provided by FOX.

After a day off from on-track activity at Charlotte Motor Speedway (CMS), the NASCAR Sprint Cup Series (NSCS) teams returned to the track Saturday morning for their second Coca-Cola 600 practice session.

Kurt Busch, with a lap speed of 192.644 MPH – which was faster than his 14th-place qualifying lap speed of 191.714 MPH, was at the top of the speed chart at the conclusion of the morning session.

Powering his No. 20 ride at 194.252 mph, Matt Kenseth earned his second pole of the season on Thursday at Charlotte Motor Speedway. The Joe Gibbs Racing driver will start first in Sunday’s Coca-Cola 600 (6 p.m. ET, FOX, PRN, SiriusXM) NASCAR’s longest race and one of the sports’ crown jewels.

Starting alongside Kenseth is Joey Logano, whose qualifying speed of 192.836 mph put his No. 22 Team Penske Ford in the second spot for the 600-mile event.